Firstly, I did not run it!

I am not saying I won’t. But, the experience of being a tourist/spectator at the London Marathon on the 23rd April this year, was for me as significant.

You see the TV moving images and numerous still images in the media. However, honestly, nothing does it justice. I had first agreed to go down in February. My budding and very excellent club running friends organised it all. I think this distilled my experience as instead of just going down and being overwhelmed, I followed people with a purpose, plan and passion for the race.

The following collection of photographs (all taken by my tiny Samsung phone) illustrate some of my experiences from the day: 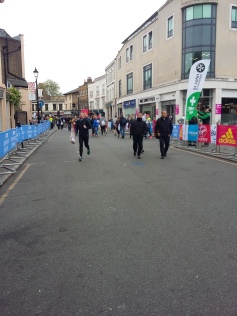 08:31 – arrived at Cutty Sark – which is our first viewing point. We are not the first at that time! But, definitely needed to get there then for prime location. I, of course, swanned off for Starbucks and then tripped into McDonalds for a breakfast bap… not sure the day inspired me to eat like a marathon runner.

What is notable for me here was the presence of: security/policy, TV crew/equipment and corporate sponsors. Of course all three of these are common place at any modern day sporting spectacle, but the scale from as soon as you hit the 26.2 mile course was incredible.

12:37 – walked along the course back to the 18 miles mark. The pace of the elite, club and front main pack runners was astonishing. I am not a running enthusiast by any stretch but how quickly people were running or wheelchairing was mind boggling when you extend it to a 26.2 miles distance. The female winner this year, Mary Kietany, ran a world record time of 2 hours, 17 minutes and 1 second. The equivalent of 11.47 mph… and aged 35. No words really, other than, wow. 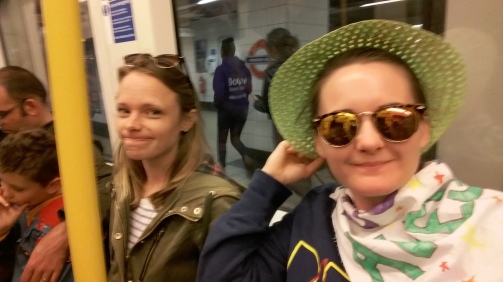 13:37 – 16:38 – general mincing on public transport, that was very busy but free, then greeting finishers in St Jame’s Palace grounds. We then collapsed in Green Park for some rest ourselves. It was a very chaotic day with the amount of runners clocked at 39,400 people. Even more chaotic there is an estimated 800,000 spectators – so 20 spectators per runner – that is crackers! I cannot think of many places that can accommodate, so successfully, such a number other than London.

I definitely bucked the trend of dressing athletic or normal, and went with my traditional sports spectacle wear of silly hat, banners and sunglasses. I was not alone. There were so many jazzy people supporting, playing music, dancing around, shouting like crazy. The spectators were as interesting to watch as the runners! 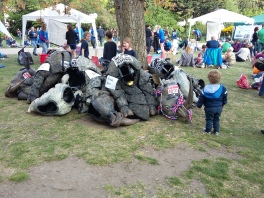 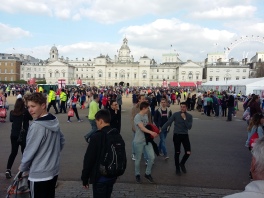 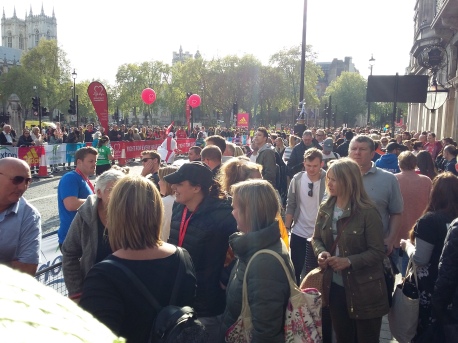 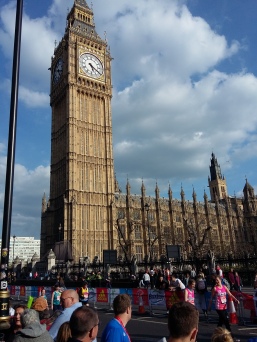 16:45 – 18:04 – the time it took to walk from Green Park to our bus back out of the city. On Google maps it should take 25 minutes normally! But, I over ruled the group and stated I knew a good way back and wanted to view the finishing line. Alas, I had not anticipated how the barrier-ed parts of the race literally shut the centre of London down.

At certain points, as you can see above, there were either masses of people like sardines or the absolute opposite and no cars or souls. By Westminster it was eerily quiet. Another highlight of the stroll back was the pile of rhino costume heads. The charity ‘Save the Rhino’ had stock piled their marathon entrants heads by a tree, and it was so bizarre! The finishing area with the festival feel was a bit of a runner’s Disneyland. 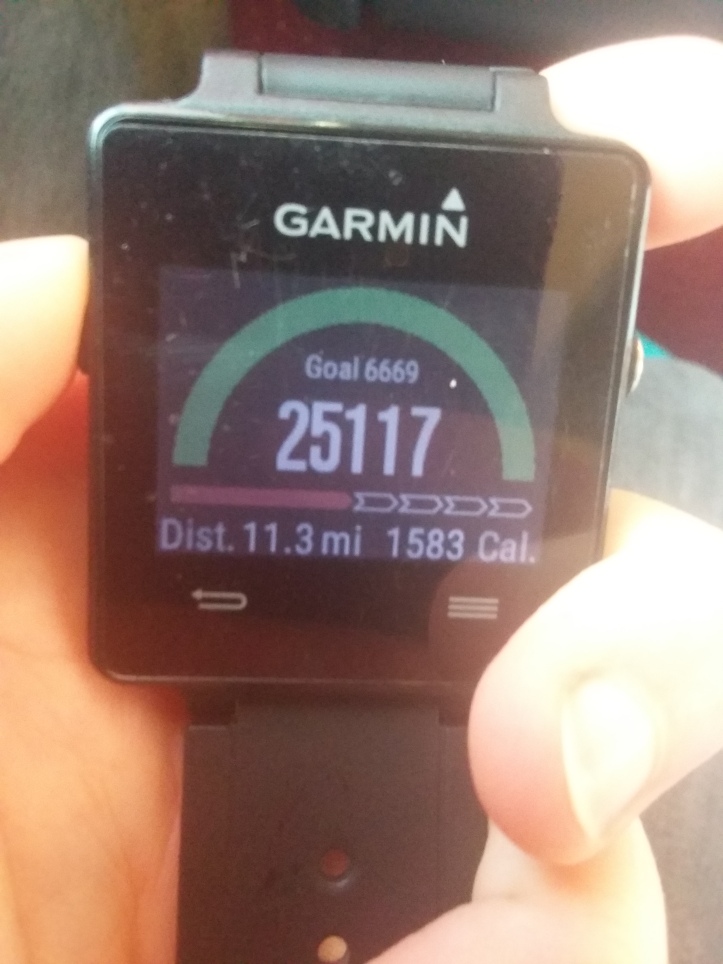 18:10 – back on the bus out of the city and I clocked my own personal physical expenditure. 11.3 miles, over 25,000 steps and over 1500 calories, which considering my golfing average walk is 6669 steps. Not quite a marathon, but for a spectator that is some miles!

Overall, I thoroughly enjoyed and would recommend going to watch. The photos, statistics and thoughts I have expressed do not even begin to pick up on the: atmosphere, noise, smells or emotion you feel. For that you will just have to experience it for yourself!