A week on from the announcement that the historic figure Fidel Castro had died I have reflected on my visit to Cuba in September 2014. I asked my older brother to take some photos in the Havana based Museum of the Revolution. The three photos are below and are celebrating Cuba’s sporting prowess. The museum itself was fairly typical of Havana in that it was a mixture of rustic tourism and unfinished history. This is summed up in another picture below by the contrasting states of the houses in a suburb of Havana. 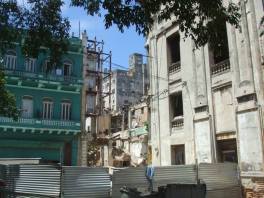 The history and present of Cuba is incredibly contested and still meandering as an important example of ‘American’ based revolution and attempt to be independent of its very close geographical neighbour. Also, an emerging hotspot for Western tourists. I certainly had a fantastic two weeks as I explored the incredible history and culture in Havana, then lazed on a glorious beach relaxing.

On reflection my interest in Cuba now is- sport- personally based, media based and academic based. Personally, two years ago I found it odd that sport was featured in the Museum of Revolution (hence why I asked for the photo evidence). Now, after the media attention paid to Castro’s death I am thinking actually what is the role of sport. ESPN covered the death of the political icon in a reasonable amount of detail in these two articles (Former Cuban leader… Luis Tiant…). The media take a descriptive and historical perspective linking the leader to sport as an interest story and tool of political power. The academic understanding of this intersects my own experience and the medias take as scholars have positioned ‘baseball diplomacy’ as a moment to understand America/Cuba relations (for example, Sugden and Carter 2012) and more widely sports role in diplomacy (for example, Pigman and Rofe 2013).

I am left pondering:

These thoughts will hopefully stew and produce a research idea in the future. In the meantime I am going to let it flow into my teaching as I have explored nationalism and sport recently with a group of final year students at Worcester; plus with my ongoing role on the Sport and Diplomacy masters module offered at SOAS. A wonderful example of research informed teaching!